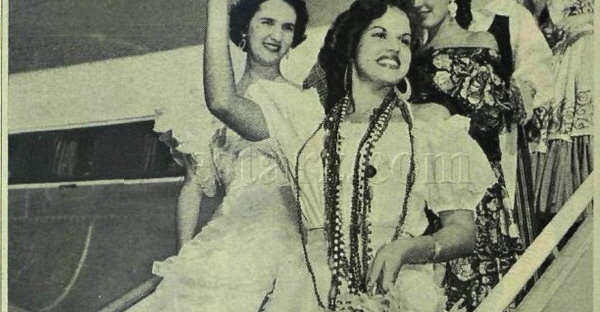 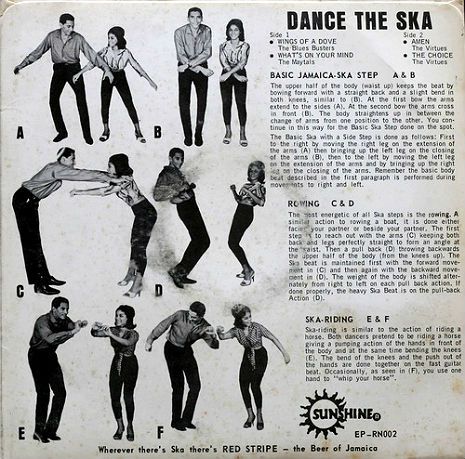 Before Ronnie Nasralla danced the ska in the iconic step-by-step guides with Jeannette Phillips (above), his dance partner was Evelyn Andrade, Miss West Indies. I recently spoke with the Honorable Arnold Foote, OJ, CD, JP at his home in Kingston who confirmed that Nasralla’s original dance partner was Andrade. “They were a dance couple,” he told me. “It was Evelyn first. She was gorgeous. W were very close friends. She was a fabulous dancer. Jeannette Phillips was a good dancer too, but she was after,” said Foote.

Numerous articles and advertisements confirm this. A Daily Gleaner article on November 7, 1953 gave a review of a show in which the two had danced. The article states, “Horace Forbes and his group of young artists, including Jamaica’s Beauty Queen Evelyn Andrade who appeared at the Carib Theatre on Wednesday night Nov. 18, by kind permission of Mr. Tilly Blackman, can be proud of themselves. They put on a neat and varied half hour’s show, that was a great deal better than most cabaret imports from the United States. . . . The stars of the show, Ronnie Nasralla and Evelyn Andrade then came on and danced ‘Harlem  Nocturne.’ It was a stylized version, very Dunhamish of blues and swing dancing and extremely effective. What a good interpretative dancer Andrade is becoming and how well Ronnie is supporting her.  The show ended, (happily it was not too long), with Evelyn Andrade, Ronnie Nasralla and Tony Verity dancing the Rhumba, the Conga, and the Mambo to the Buckcteers accompaniment. It was here that one realized how much better our local starlet dances than some of the Cubans, who have visited the island in the past couple of years. Ronnie supported Andrade well again, but Tony Verity though assiduously following the steps, does not really seem at home in this style of dancing. I wonder, if his metier does not lie rather in the easy up dancing manner of Jack Hulbert and Jack Buchanan, a type of dancing in which height helps rather than handicaps. This show, I gather, is going on shortly to the Glass Bucket Club, and deserves every encouragement.”

Evelyn Andrade went on to marry Tony Verity who became a famous Jamaican emcee. You may remember him from this ska film at the Sombrero Club featuring Byron Lee & the Dragonaires and the ska dancers. He is the host that starts the film. Tony Verity later went on to marry Byron Lee’s first wife, Edna, also known as Bibi, with whom Byron had three children.

The following is a short piece that appeared in JET magazine, May 26, 1955 that announced Evelyn Andrade’s marriage to Tony Verity.

Evelyn Andrade also danced with Nasralla’s sister Jeanette with the Rowe Studio of Dancing doing ballet performances at the Carib Theatre. This sister Jeanette Nasralla is not to be confused with Jeannette Phillips who later became Jeanette Mills. Over the years, Evelyn Andrade and Ronnie Nasralla danced at a number of performances, including “Caramba” that featured Jeanette Nasralla, Tony Verity, Totlyn Jackson, and Lord Tickler. The following is an advertisement from this show from the Daily Gleaner on October 15, 1955. 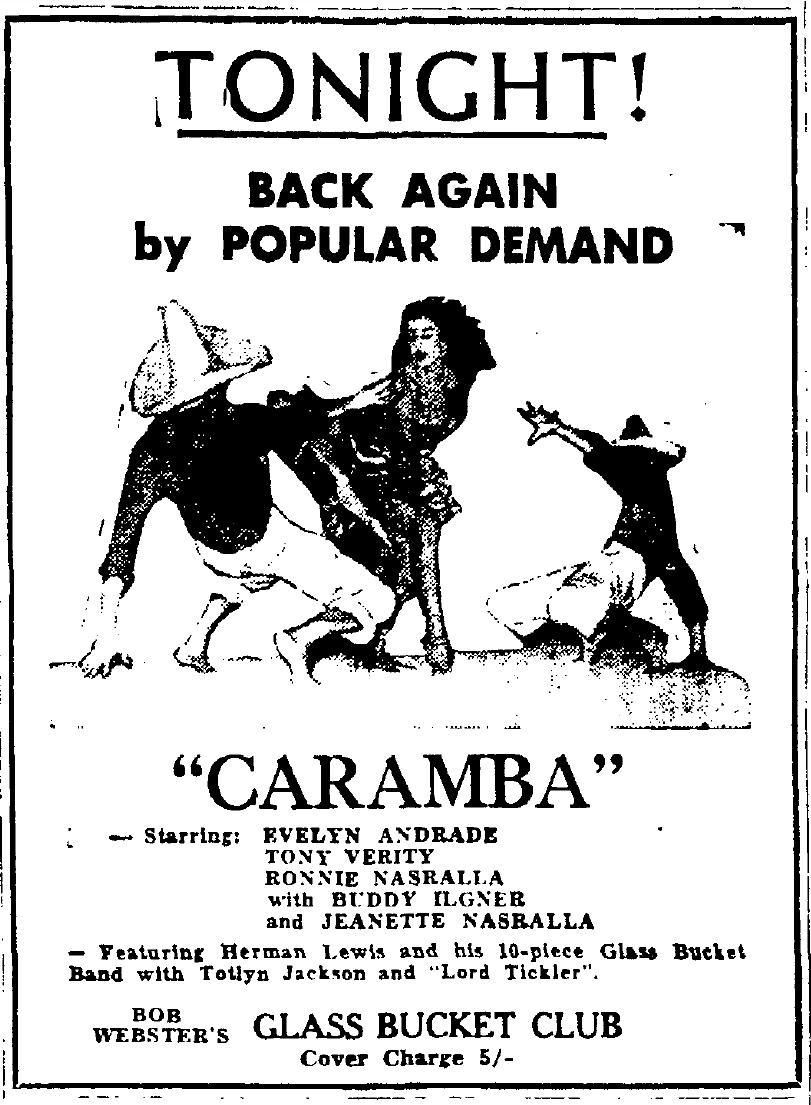 The following is a photo of this performance featuring Ronnie Nasralla and Evelyn Andrade from JET magazine, August 19, 1954.

Over the years, Ronnie Nasralla and Evelyn Andrade continued to perform together, including the performance below from March 26, 1955.

In 1959 they performed together in a performance of “Hey There” which also included Tony Verity, Jeanette Nasralla, and recording artist Sheila Rickards.

According to Josh Bailey, owner of the Veestarz website devoted to beauty pageants, Evelyn Andrade was the “first black admitted to a major international beauty contest. An accomplished dancer and swimmer, with a 36-24-26 figure, 18 year old Miss West Indies of 1954, Evelyn Andrade became the first colored woman admitted to a major white beauty contest in the United States. Her father was a Syrian Jew and her mother was a black native from Kingston. After the Miss Universe contest, Evelyn represented Jamaica in the ‘Miss Caribbean’ contest in Trinidad and won before an audience of 4,000.”

Evelyn Andrade died in May, 2013. The Jamaica Gleaner reported, “Former Miss Jamaica and Miss British Caribbean Evelyn Nalley has passed away. One of her daughters, Kim Merril, said Nalley had not been well for a few months. She described Nalley, who first came to national prominence as Evelyn Andrade, as a vivacious, happy woman. ‘She loved her family, she loved her country of Jamaica, though we hadn’t lived there for many years,’ Merril said. ‘It was always in the back of her heart and her mind to always go home.’ Nalley was married twice, first to popular Jamaican entertainer Anthony Verity and then to businessman Hayne Nalley. The former beauty queen moved to Puerto Rico with her second husband and their family before settling in Winter Haven, Florida, in 1972. Merril said her mother would be cremated. ‘She basically wanted her ashes to be put in the ocean,’ Merril said. ‘So that’s what we will be doing. The ocean was always close to her heart.’ In the September 9, 1954 issue of JET magazine, Nalley was featured in the cover story as ‘The beauty queen who snubbed Hollywood’.”

Here is a copy of that JET magazine that I found and purchased on ebay. 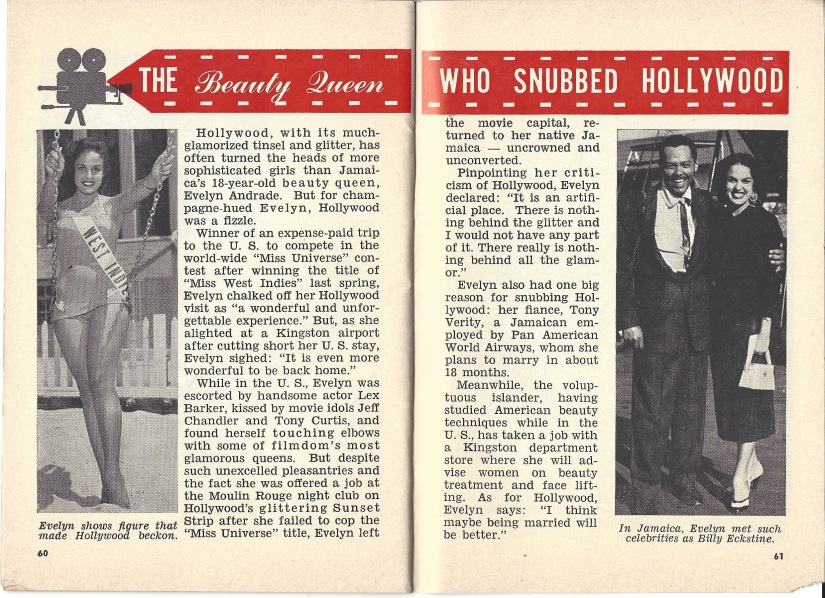 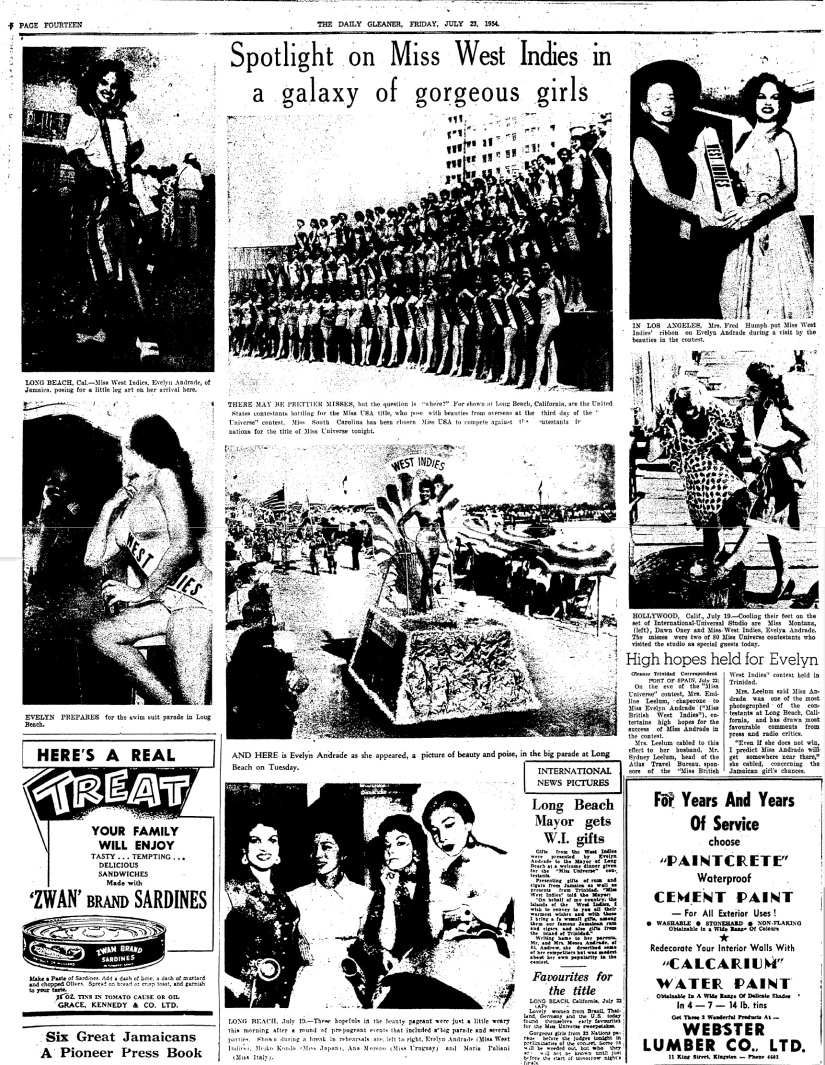 Here is an article from Hue Magazine, November 1954 that shows Evelyn Andrada hobnobbing, or flirting, with Tony Curtis! 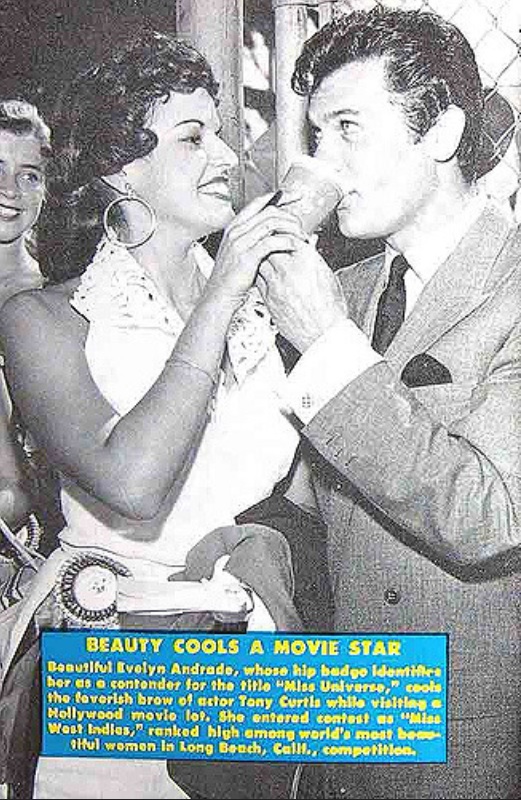 The photo and caption below from JET magazine July 22, 1954 also publicizes\ the Jamaican beauty. 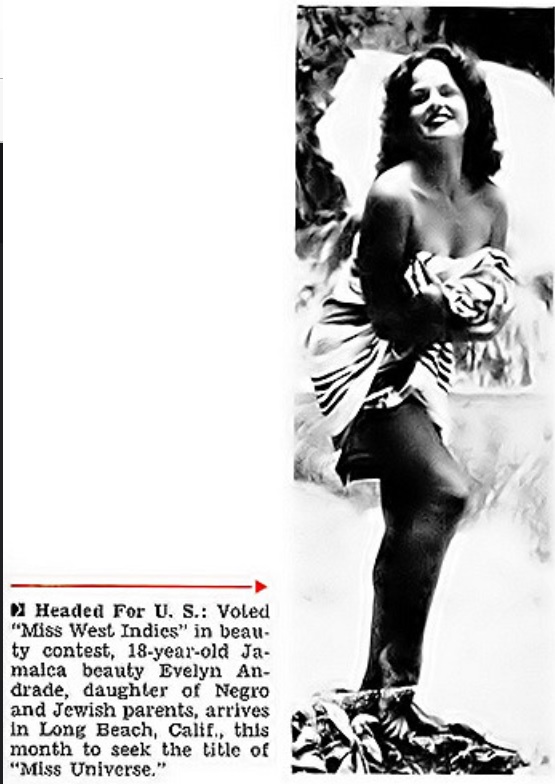 Bailey has posted a number of archival photos of Andrade, including the following: