When we see photos or even some video of Sister Mary Ignatius Davies, we typically only see her in her later years, frail, old, in her habit. But I recently found a photo of Sister Iggy from 1940 when she was just 19 years old. The photo appears in Sister Mary Bernadette Little’s massive book, You Did It Until Me: The Story of Alpha and the Sisters of Mercy in Jamaica. The book is full of wonderful information, although very few of its more than 500 pages are devoted to the music program at Alpha. Instead, it is a book more on the Sisters, and rightly so, since Little herself was a member of the Sisters of Mercy and a principal at Alpha Academy for 30 years. She died last year.

I also included a photo of Sister Ignatius in my book, Songbirds: Pioneering Women in Jamaican Music that pictured her in March, 1984 when she traveled to New York and saw snow for the first time. Here she is pictured on the right with Sister Mary Theresa, and this photo was graciously given to me by Charles Simpson, an Alpha Old Boy who is still very involved with the school. 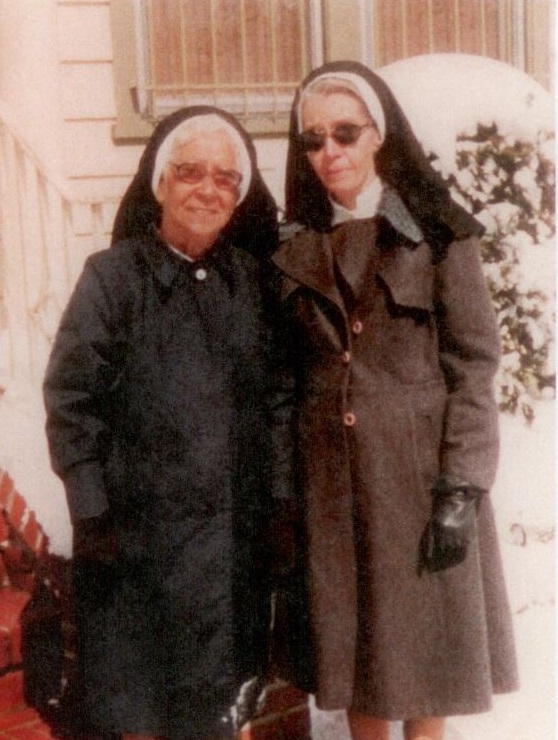 Simpson was a student at Alpha Boys School from 1953 to 1960 and a trombonist in the band. Although we know Sister Iggy’s affinity for music and nurturing musical affinity in her boys, she also encouraged young athletes, says Simpson. “The ability about her, and maybe why she is loved by all the boys, is that if boxing is going on, she’ll be a part of it. She would put on her gloves while in her habit. She was never in any other thing but her habit. Earlier in the day it was black and white, full black all the way down to the ankles and shoes. They had a white breast plate that ran across the chest. She was always playing. She was a complete sports person. She was a fan of the great Sugar Ray Robinson and they were pen pals. She was a tremendous cricket fan. She loved Collie Smith and love Garry Sobers, but when it came to cricket, Collie Smith was her favorite,” says Simpson. He says that as a result, the school excelled at sports like cricket, boxing, soccer, and baseball, winning many national championships. She nurtured a number of Jamaican boxing champions that came from Alpha including Alan Harmon, Roy Lee, and Kid Bassey and soccer player Owen “Ital Stew” Stewart. She founded a baseball and cricket associations for the private school league. “The boys know me because I talk to them a lot about sports and other things,” said Sister Ignatius. She also had a love for world affairs, reading, and history and she was especially fond of Nelson Mandela, Martin Luther King, Jr., and Jomo Kenyatta.

5 thoughts on “A Young Sister Ignatius”