This is the legendary Ronnie Nasralla, of Ronnie & Jannette fame, the two who taught the world to do the ska at the World’s Fair in New York in 1964. He is proudly showing his Order of Distinction that he received from the Jamaican government in 2013 for his contributions to music. He showed me his beautiful award on July 25, 2015 when I visited him in his home in Georgia to talk about his life and career. What a sweet man!

Among the topics we discussed were his days managing, and he revealed to me something that was not shocking, but still, it was incredible to hear from the mouth of someone who was there, who experienced it. Nasralla told me, “I was managing artists, Byron Lee, Blues Busters, The Maytals, and Eddie Seaga said to me that all these artists were being used by these producers. They were giving them like a penny for a record, if I could take them over, manage them and help them with recording, and so I said, ‘okay, I’ll do it.’ So I took over the artists and I recorded them and paid them twelve times more per record, and the downtown producers who were recording these artists threatened to kill me. He threaten me. He had four men threaten me. Coxsone Dodd.”

He also talked of his childhood and family and the fact that he is involved in many of the arts, such as theater and he paints as well. Here are a few of his paintings that are hanging on his wall.

He talked about discovering a female vocalist. Nasralla said, “There was a downtown bar I used to go into regularly, upstairs, and Boasie (Phillip James) said to me, ‘Ronnie, how is girl be like that downstairs that can sing?’ I asked him to have her come up so I could hear her and he brought up this girl and she sang for me. She said she couldn’t sing in front of me, she would sing behind the door. She sang from behind the door and I couldn’t believe it, she was so good. Marcia Griffiths. I wanted to use her on Byron Lee’s Christmas morning show and I asked Byron to use her and Bryon says no, he can’t use her, they are full. I said, ‘Byron, just use her on one song,’ and he said, ‘Okay, tell her to come.’ So I got my first wife, she was a hairdresser, to fix up her hair and I got a gown for her and she went on stage and she brought down the house! She sang ‘Born to Lose,’ and brought down the house and everyone called encore and she sang it a second time because she didn’t rehearse a second song. I started Marcia Griffiths. When I got my Order of Distinction, she was there and she said, ‘Ronnie, you started me. You got me where I got to.’ And I’ll never forget it.”

Ronnie Nasralla also told me how he came up with the different dance steps that he designed based on the moves he had seen at Chocomo Lawn in downtown Kingston, moves that he taught to crowds at the World’s Fair in New York in 1964. I have written about this many times and you can read more here and here and here and here. But Ronnie Nasralla regaled those long-ago days once again this past week to me, with a smile on his lips and a twinkle in his eye. He said, “Jannette danced at school with my sister. And when I went to promote the ska with Eddie Seaga, I asked her if she would do it. Eddie Seaga, we were very close friends, she was very close with my sister, he said there was music in Western Kingston where he comes from, he said it’s called ska, and I should get Byron to promote it. So I said, ‘Byron can’t promote it if he don’t know it.’ So he said they are having a dance at Chocomo Lawn and Eddie Seaga said, ‘Watch what the people are doing and see if you can come up with a brochure for people to dance the ska.’ So I mingled with the people and danced with them and came up with a brochure in about two weeks time and I give it to Eddie Seaga and he sent ska all over the world.”

When I told Ronnie Nasralla that people today still love ska all over the world, he didn’t believe me! Downtown, uptown, race, class, countries, ska knows no boundaries. Ska was created downtown through the ingenuity of the Alpha Boys and their colleagues, championed by the ambassadors of ska, like Ronnie Nasralla, Byron Lee, and Eddie Seaga, and the world has been dancing ever since! What a debt of gratitude we owe these originators and exponents of ska! 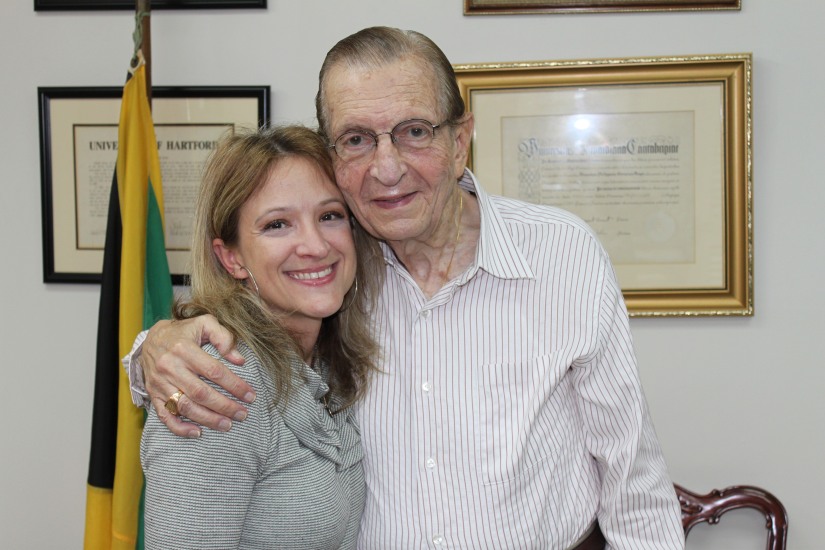