You might think that the only Prince popular in Jamaica is Prince Buster or maybe Prince Count Miller or Prince Jazzbo. However, THE Prince, the artist-once-again-no-longer-formerly-known-as Prince, the recently deceased Prince, was also popular in Jamaica, as he was all over the world. Countless Jamaican artists have included Prince songs in their live concerts, and the Jamaican press has followed Prince’s career throughout the decades, including his induction in to the Rock and Roll Hall of Fame, his Grammy Awards, his perfume for women, and other events and news.

Kingston movie houses screened Prince’s movie “Purple Rain” when it first came out and then periodically over the years that followed.

One of many advertisements for the screening of Purple Rain, from the Jamaica Gleaner, Dec. 17, 1984.

Jamaican musicians were inspired by Prince’s genius, and in an article in today’s Jamaica Observer, “Wayne Armond, the former front man and guitarist for the ‘70s reggae band Chalice, said he was rendered speechless when his wife informed him of the 57-year-old musician’s passing. ‘I dropped my wife off at work and was making my way back home when she called and told me Prince had died… I was heartbroken. Honest to God, that is the only way I can describe how I feel about his passing. You would not understand, but Prince is my favourite artiste,’ he told Splash. For Armond, Prince’s music represented a new, fresh sound for the time. But being a fellow guitarist meant that these two had much more in common. ‘A lot of people don’t recognise what a monster guitar player Prince really is. The popularity of his songs and performances really overshadows his tremendous skills on the guitar. I have watched clip after clip of him playing and it is just amazing to behold. I remember watching him guest at an event with a number of other great musicians and when they played My Guitar Gently Weeps. The only way I can describe his guitar solo for that performance is… sheer artistry.’ Prince penned classics including Purple Rain, When Doves Cry, 1999 and Nothing Compares To You. Music aside, the late artiste also captured Armond with his determination and the forthright nature he displayed from the very start of his career. ‘I remember hearing him as a 19-year-old, he took his early music to a record company. When the music execs said, ‘We like it but we will find someone to produce’ Prince just asked back for his demo tapes and left. I respected him from that day in the same way I respect Muhammed Ali for his humanitarian work. It the same way I feel about what happened when he was having troubles with his record company and he just changed his name to The Artist formerly known as Prince in order to release his new music… Just great,’ said Armond. He believes like the music of the greats Louis Armstrong, Frank Sinatra and Sammy Davis, Prince’s legacy will never die. ‘Every Jamaican musician should look into this man’s music. His work should be studied by students at the Edna Manley College for his compositions, lyrical content and musicianship.’”

Of course, there is a reggae version of many of Prince’s songs, including the album, “Purple Reggae,” which features a number of Prince tunes covered by various artists like Ali Campbell of UB40 and Sinead O’Connor.

But I think my favorite connection between Prince and Jamaica comes in this little editorial that was submitted to the Jamaica Gleaner on July 9, 1987 that complained about the lyrics of Prince’s music and the popularity of North American music. 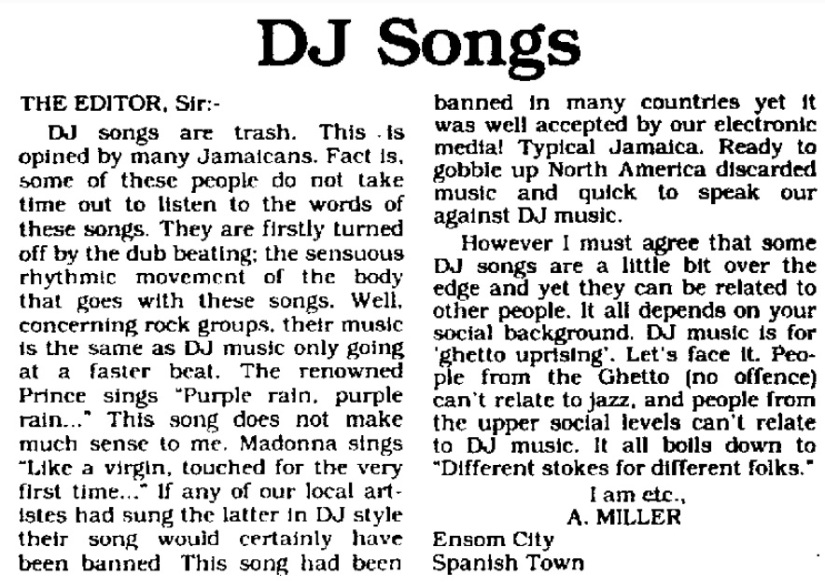 Ska has a long tradition of covering other songs, and so here is a collection of Prince songs in the ska and reggae genre. And could it be more appropriate that the links are purple?!

Me First and the Gimme Gimmes, “Nothing Compares 2 U”

Potato 5, “I Could Never Take the Place of Your Man”