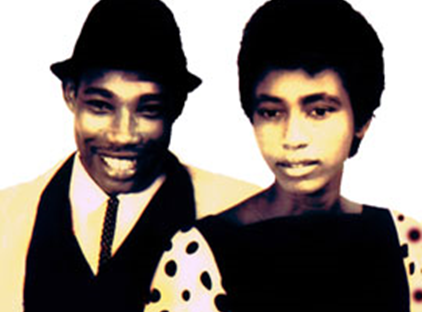 So thrilled to see that Pasty Todd will be performing with Stranger Cole, her longtime vocal partner after Derrick Morgan, in Minneapolis May 13-15th accompanied by Phil Chen, Dennis Sindrey, and the Prizefighters! I will be there for sure! More information on this show is located here. So today let’s celebrate that talented woman who was one of the few, along with Millie Small, Yvonne Harrison, Hortense Ellis, and a small handful of others, to break the gender barrier in the 1960s. I found the lovely photo above of Millicent “Patsy” Todd in a 1969 issue of Swing Magazine in the National Library of Jamaica archives in Kingston this past February. And the following is the chapter of my book, Songbirds: Pioneering Women in Jamaican Music, which I have written on Patsy, which you can purchase here:

Millicent Todd was just a teenage girl when ska hit the town. She was born on September 23, 1944, grew up in Fletcher’s Land in West Kingston and was Prince Buster’s next door neighbor. She attended All Saints School and left at age 14. Although she wasn’t raised in a particularly musical home, and the Catholic Church she attended didn’t have much to offer in the way of music since the program was still presented in Latin in those days, she did listen to the music coming from America. “I’m somebody who liked to listen to the radio, and I really got interested in this group, Frankie Lymon & the Teenagers. I used to hear them singing and I used to sing after them,” she says.

Derrick and Patsy in their early years.

Millicent was young and the music industry could be an unkind environment, especially with so much skilled talent, professional musicians in the studio and producers wanting to get one take down on acetate for play at the sound system days later. “It was hard. Very hard,” says Millicent. “I was 15, 16 years old. And it was hard because you didn’t have a say. I didn’t get the chance to go to rehearsal and things like that. I would go to the studio and my partner would tell me, ‘This is so-and-so and so-and-so,’ and I would write it down, and I would sing from the paper, that was it. I don’t remember what it was, what I did or how much record I did. I didn’t have a say, to say to the musicians, ‘Would you play this,’ or “Would you play that.’ They would kill me. You just take what they give you and that’s it. The musicians that we had were great musicians. I think they could play with anyone in this entire world. They knew music, they knew what they were doing. They were absolutely fantastic. But they were very egotistical. You know, it was either just them or nothing. The problem when you have a band that every musician in that band could be the leader, it’s very hard. That’s how great they were,” Patsy says. 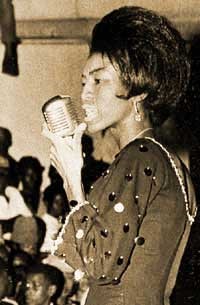 She was young, innocent, naïve, but her talent transcended. Graeme Goodall recalls her work in the studio. “I loved her dearly. She was a very nice person, very pleasant to work with, very polite. She was not so much a leader, but she was very very good and she, like most of the vocalists of the day, understood that this was her big break,” Goodall says. Derrick & Patsy continued to record hit after hit as a duo, including “Feel So Fine,” “Are You Going to Marry Me,” “Crying in the Chapel,” and countless others. Perhaps the most well-known song the duo recorded was “Housewife’s Choice” in 1962 for producer Leslie Kong. This song was originally named “You Don’t Know How Much I Love You,” but Marie Garth, legendary radio host, had so many housewives call in to the station to request the tune that she renamed it and future pressings reflected this name change. The song also became popular in the United Kingdom as West Indian immigrants played the tune which was released on the Island Records label. Derrick & Patsy were a hit. They were the perfect boy-girl duo singing sweet songs of love and romance. They were so big that when popular American artists came to perform in Kingston, so too did Derrick & Patsy as part of the Jamaican spectacular. They performed at shows with Ray Charles, Ben E. King, and Sammy Davis Junior. Derrick would record with a number of female vocalists in duets including Gloria Franklin (who also performed as Gloria & the Dreamlets), Naomi Phillips (who also recorded with Doreen Shaffer), Hortense Ellis, Paulette Morgan (Derrick’s sister), Yvonne Harrison (also called Yvonne Adams), and Jennifer & the Mohawks (Jennifer Jones). 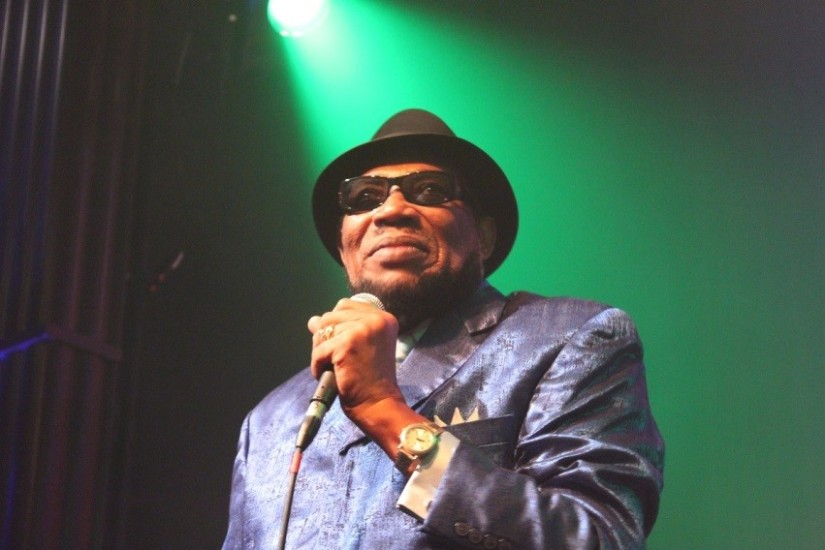 Derrick Morgan performs in Chicago in 2013. Photo by Heather Augustyn.

When Derrick Morgan left to go to England to try his hand at success overseas, Patsy was approached by another singer with the offer to perform duets. She recalls, “Stranger [Cole] came to talk to me. He said that Duke Reid sent him and he said he wanted to do some record and the only way that Duke Reid would record him if I sang with him. And it kind of hit me off guard because Derrick was in England, and I said to him, ‘I don’t know about that, I have to think about it,’ and then I saw this guy really needed to do this. He believed he could make himself better and do something that he love and getting paid for it, you know, a charge was in him. And I said okay, I tell him yes. And that’s how Stranger Cole and I came about.” One of their biggest hits was the song, “When I Call Your Name,” which they recorded for Duke Reid. Other classics include, “Down the Train Line,” “Yeah Yeah Baby,” “Give Me the Right,” “ Love Divine,” and plenty more. The tunes were also classic boy-girl duets, inviting and harmonious. Most were recorded in 1964 for Sonia Pottinger and Duke Reid. Stranger remembers his days with Patsy. “Mr. Reid was the one who asked me to sing with her. He told me to go to her and asked me to sing with her. So ‘When I Call Your Name’ we recorded and we do many many more songs together. She was not shy, she was much braver than I. She make hit record before I do, with Derrick Morgan, so she was a more limelighted artist than I was. I think that was a blessing for me to have a lady with more hit songs before me. I am very lucky to sing with her, and I think she is very lucky to sing with me,” says Stranger.

Patsy wasn’t just a duo artist. She was also an artist in her own right—Queen Patsy. At a time when women weren’t doing much solo work at all, Patsy paved the way for strong female vocalists. One of these tunes, “A Man is a Two Face,” is not a ska or rocksteady song, but true to the American R&B tradition with soulful vocals, music by Lynn Taitt & the Jets. The lyrics offer advice from a mother to a daughter that she shares with other women about how a man will smile and sweet talk but leave you singing the blues in the night. It was not the submissive songs of innocent love she sang with Stranger and Derrick. It was a song of empowerment and knowledge and sisterhood. It was Patsy’s take on “These Boots Are Made for Walkin’,” both in sound and in spirit. She was physically without a man by her side as in her duos, and she, as a solo artist, was all woman. Her voice transforms in this song from her duos. She is no longer the little teenager—she is informed, guiding, warning. The flip side of this recording on Sonia Pottinger’s Gay Feet label is “It’s So Hard Without You” where Patsy sings that there is nothing she can do without her man, so what do we make of this paradox? Certainly these songs reflect the emotions women feel in relationships—the phases and complexities.

Stranger Cole performs in Chicago in 2012. Photo by Heather Augustyn.

Two of the other solo songs that Patsy recorded for Producer Sonia Pottinger were “Fire in Your Wire” and “Pata Pata Rock Steady” which were unique in their content. “Fire in Your Wire” is a soca tune originally written by Calypso Rose of Tobago, another pioneering woman, whose lyrics are the typical sexual innuendo of calypso and soca, but certainly not typical of those sung by a female up to this point. “Pata Pata Rock Steady” was also a song written by a female artist in 1957 by Dorothy Masuka for singer Miriam Makeba, both South African artists. “Fire in Your Wire” and “Pata Pata Rock Steady” were songs that showed Patsy’s take-charge side and celebrated the creativity of other women. Of “Fire in Your Wire,” Patsy says, “I wanted to prove a point that I could do other styles. I would take chances to see what I could do. I never had a say in any of the songs I sang with the duets, so this was an opportunity to try different things.”  “Pata Pata” was not the only Miriam Makeba song Patsy covered. She also recorded “The Retreat Song,” also titled Jikele Maweni, which had a distinct African feel, especially since it was sung in the Xhosa (KOH-suh) language whose lyrics tell of a vicious stick fight. Not the typical teenage love song.

Patsy traveled overseas to share her talent, to the U.S. with Byron Lee & the Dragonaires and to Belize. She sang on over 100 recordings. But she left it all behind in 1969, as the music left ska and rocksteady behind. She simply grew tired of the industry and moved to New York to start a new life. Since the Legends of Ska Concert, organized by Brad Klein in Toronto in 2002, Patsy has occasionally returned to the stage to perform, alongside her duo partners, Stranger and Derrick Morgan, as well as on her own.