The following article appeared in the June 27, 1964 issue of the Star Newspaper with the headline, “Skatalites Go Into Orbit.” The article by Lloyd Davis states, “Whether it was ska-ing ‘On Broadway,’ painting a ‘Ska-trait of my love’ or just plain ‘I’m in the mood for Ska’ there was something for every taste at Bournemouth on Wednesday night when Tommy McCook and the Ska-Talites went into orbit. It was just the shot in the arm the Bournemouth needed to revive this once popular night spot. The dance floor was a sea of heads bobbing up and down in ska tempo. Any physical training instructor would have been proud of the hand movements. It seems as if diets will be out soon, for the Ska could well pull that extra pound from the tummy area. Jamaicans all know of ‘Carry go, bring come’ but wait until you hear it set to music in the Ska beat. It’s a different kettle of fish. For the past few weeks, the band have taken over Bournemouth and have kept the place alive. Roland Alphonso on tenor sax, Don Drummond on trombone (when he sits in), leader Tommy McCook on tenor sax, Lloyd Brivett [sic.] bass, Lloyd Knibbs [sic.] drums, Johnny Moore trumpet, and Lester Sterling, alto sax and trumpet combine to produce a sound that’s great.”

Tommy McCook is the man who launched them:

“In 1962 a young musician returned to his island home after spending a few years in England and the United States. This young man, having wide experience in jazz music, linked up with a local group of jazzmen and started to make a name for himself. He was Tommy McCook. Tommy, who was then an authentic jazz musician and an increasingly popular artist, was invited by Messrs. Coxon [sic.] and Randy, to do recording for them, but for McCook, jazz was not to be given second place for SKA (which at the time was of very little significance). Roland Alfonso [sic.], who was doing recording for Coxon [sic.] and Randy left the island and also a vacant space for a recording artist which could only be filled by someone as proficient as Tommy McCook. It was at this stage that he decided to enter the recording scene and he did so with terrific force. One of his first record releases was ‘DOWNBEAT’ which was a hit, and he then went on to make his next hit ‘Road Block,’ a Ska instrumental. This release projected McCook to the front rank of leading recording artists where he was in constant demand by Ska Lords like Randy, Tip Top, Duke Kid [sic.], and Prince Buster. Today Ska as it should be played is produced by the talented musicians who are not attached to any particular band. Tommy McCook is one of these musicians. He realised that the Ska boom was being heard all over Jamaica and in other parts of the world and he organised his fellow musicians and formed a new Group called the SKATALITES. The SKATALITES have made four public appearances so far and have made a good impression.” 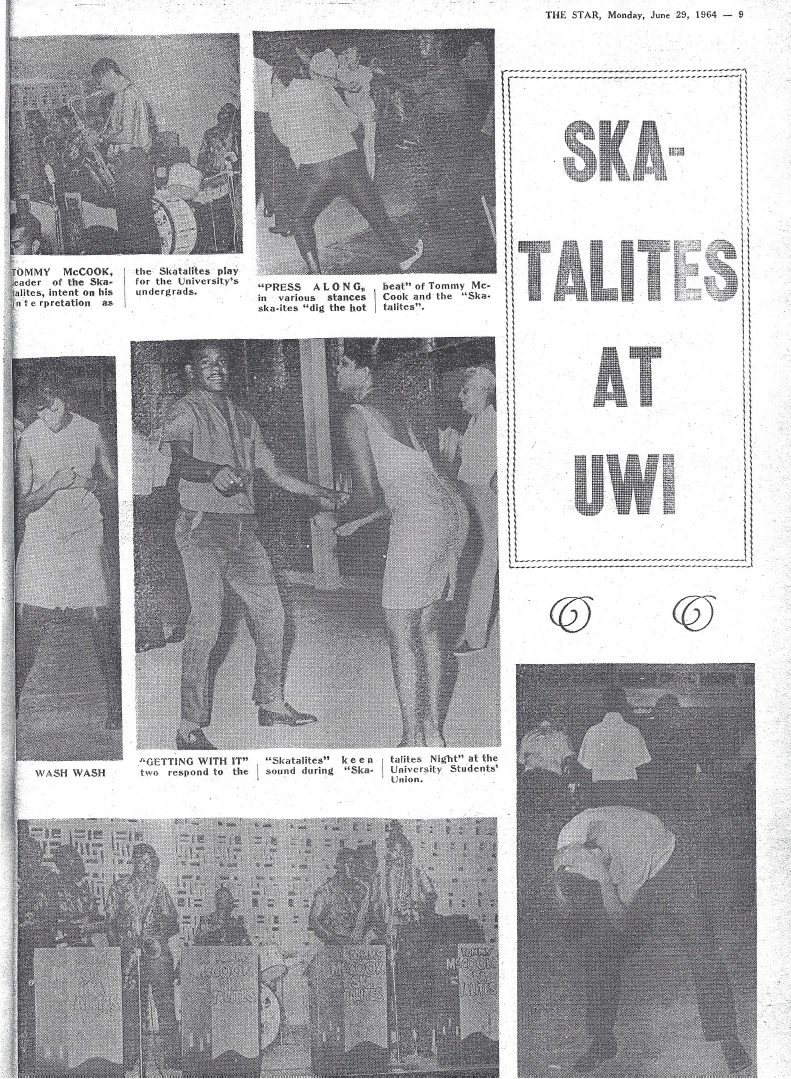 This article, which appeared in the Star Newspaper just two days later on June 29, 1964, provided a photographic account of one of those performances that the Ska-Talites made at the University of the West Indies, presumably at Mona. The top left photo shows Tommy McCook performing with the caption, “Tommy McCook, leader of the Ska-Talites, intent on his interpretation as the Skatalites play for the University’s undergrads.” The next photo bears the caption, “Press along, in various stances, ska-ites ‘dig the hot beat’ of Tommy McCook and the ‘Ska-talites.'” Below a photograph of a woman doing the “Wash Wash” appears, the song that Prince Buster made famous at the 1964 World’s Fair with the dance moves to correspond. Two ska dancers appear above the caption, “Getting With It, two respond to the ‘Skatalites’ keen sound during ‘Ska-talites Night’ at the University Students’ Union.” The two photos at the bottom feature a group shot of the band with the caption, “The men with the big sound: ‘The Skatalites’ at the Students’ Union of the University of the West Indies on Wednesday night last ‘Skatalites Night’ during the University’s ‘Festival Week.’ From left Johnny Moore (trumpet) Lord Tanamo (guitar), Roland Alphonso (Tenor Saxophone), Loyd Knibbs [sic.] (drums), Lester Sterling (alto saxophone), Lloyd Brevet [sic.] (bass), and leader Tommy McCook. Absent on the night was Don Drummond.” The next photo features a dancer with the caption, “‘Oh, Ah Can’t Take No More,’ this ska-ite seems to say.”

Don Drummond’s absence, incidentally, could be due to a number of circumstances. One, he could have been struggling with mental health issues, though he was not likely in Bellevue at this time, but more likely is a second scenario–while Don Drummond was certainly a member of the Skatalites, and a crucial member at that, he was also a widely recognized solo performer as well. In fact, that same month he headlined as a solo performer at Johnson’s Drive-Inn where he was billed as “Mr. Ska himself.” He appeared that same night with Margarita “Rhumba Queen,” so the point is that it is possible that Drummond may have had another engagement, or he simply turned this engagement down. We can only speculate with educated guesses at this point. Six months after this performance, Margarita would be dead, murdered at the hands of Don Drummond. 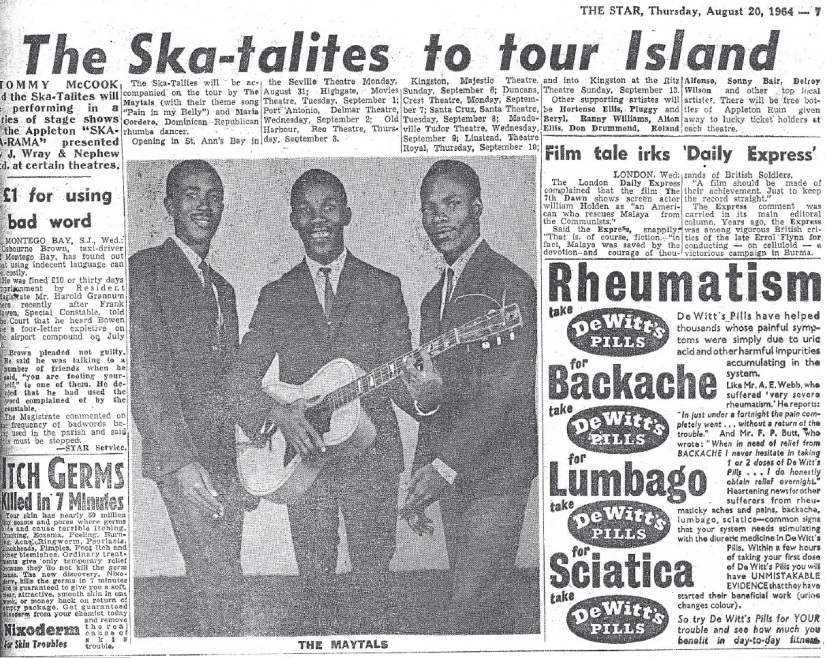 Below are two advertisements from these Ska-Ta-Rama shows. 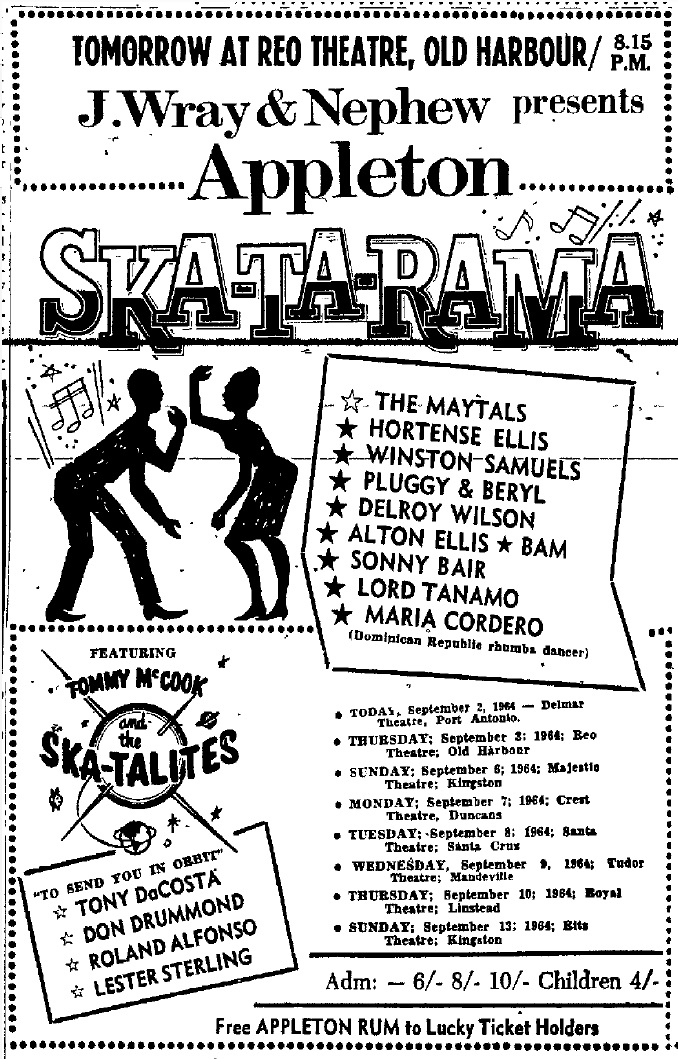 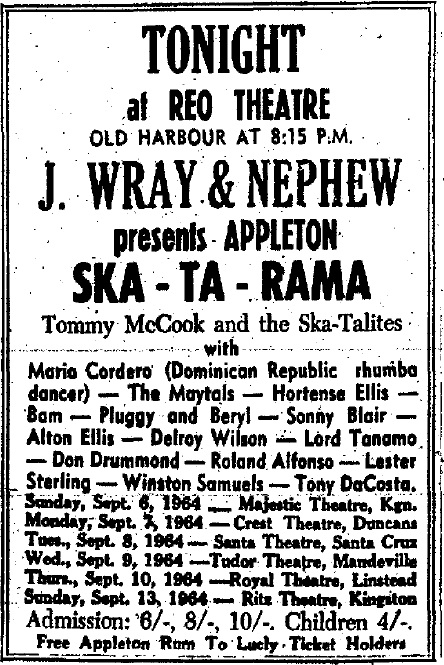