My friend Roberto Moore, a researcher and historian who lives in Kingston, was generous to send me a few clips related to Don Drummond from Star Newspaper archives from the mid-1950s. I asked him if I could share these on my blog and he kindly said yes, so here are the fruits of his labor.

First is this clip from the Star Newspaper on October 26, 1956 in the “Batman” column, rumored to have been written by Sonny Bradshaw which states, “Don Drummond, ace-trombonist is now selling insurance by day.” I had heard this over the years and was never able to confirm it and I find this instance of it in print intriguing. As I discussed with Roberto, Drummond would have recently left Bradshaw’s band in 1956, so Bradshaw, if he is the writer of this column, is not what the journalism world would call impartial here. He may have a bias, who knows. If it is Bradshaw, might be be kind of sticking it to Drummond? How long did this venture last and was it really a foray into a new line of work and why would he pursue this at this point in his life? Who knows, but it should be viewed in context, and it is quite a thought to entertain, Drummond in his suit and boogas, briefcase in hand, peddling paperwork, as Roberto and I mused. 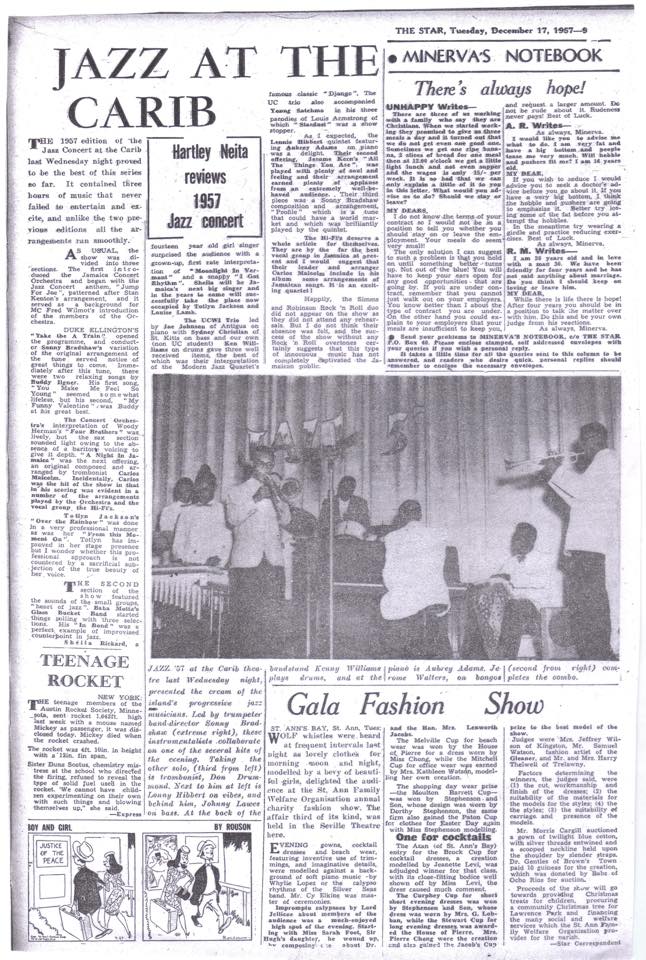 Drummond’s day job was likely short lived, if it ever did amount to anything, because as this clip shows from December 17, 1957, Drummond was back center stage for Jazz at the Carib performing with Sonny Bradshaw. Here is a better photo of the one pictured above in the article. 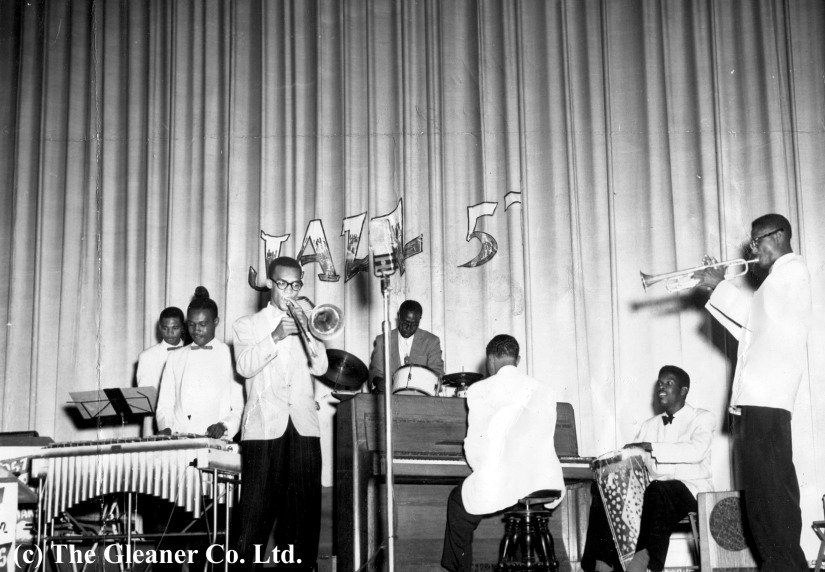 The article, written by Hartley Neita, reads: The 1957 edition of the jazz concert at the Carib last Wednesday night proved to be the best of this series so far. It contained three hours of music that never failed to entertain and excite, and unlike the two previous editions all the arrangements ran smoothly.

As usual the show was divided into three sections. The first introduced the Jamaica concert orchestra and began with the jazz concert anthem “Jump for Joe,” patterned after Stan Kenton’s arrangement, and it served as a background for MC Fred Wilmot’s introduction of the members of the orchestra.

Duke Ellington’s “Take the A Train” opened the program, and conductor Sonny Bradshaw’s variation of the tune served notice of great things to come. Immediately after this time, there were two relaxing songs by Buddy Eigner. His first song, “You Make Me Feel So Young,” seemed somewhat lifeless, but his second, “My Funny Valentine” was Buddy at his great best.

The concert orchestra’s interpretation of Woody Herman’s “Four Brothers” was lively but the sax section sounded light owing to the absence of a baritone voicing to give it depth. “A Night in Jamaica” was the next offering, and original composed and arranged by trombonist Carlos Malcolm. Incidentally, Carlos was the hit of the show in that in his scoring was evident in a number of the arrangements played by the Orchestra in the vocal group, the Hi-Fis.

Totlyn Jackson’s “Over the Rainbow” was done in a very professional manner as was her “From this Moment On.” Totlyn has improved in her stage presence but I wonder whether this professional approach is not countered by a sacrificial subjection of the true beauty of her voice.

The second section of the show featured the sounds of the small group’s “heart of jazz.” Baba Motta’s Glass Bucket Band started things sailing with three sections. His “In Bond” was a perfect example of improvised counterpoint in jazz.

Sheila Rickard, a fourteen-year-old girl singer, surprised the audience with a grown-up, first rate interpretation of “Moonlight in Vermont” and a snappy “I Got Rhythm.” Sheila will be Jamaica’s next big singer and in the years to come will successfully take the place now occupied by Totlyn Jackson and Louise Lamb.

The UCWI Trio led by Lee Johnson of Antigua on piano with Sydney Christian of St. Kitts on bass and our own (non-UC student) Ken Williams on drums gave three well received items, the best of which was their interpretation of the Modern Jazz Quartet’s famous classic “Django.” The UC Trio also accompanied Young Satchmo in his three parodies of which “Standard” was a showstopper.

As I expected the Lennie Hibbert Quintet featuring Aubrey Adams on piano was a delight. Theirsecond offering, Jerome Kern’s “All the Things You Are” was played with plenty of soul and feeling and their arrangement earned plenty of applause from an extremely well behaved audience. Their third piece was a Sonny Bradshaw composition and arrangement, “Profile,” which is a tune that could have a world market and which was brilliantly played by the quintet.

Tthe Hi-Fi’s deserve a whole article for themselves. They are by far the best vocal group in Jamaica at present and I would suggest that their leader and arranger Carlos Malcolm include in his album some arrangements of Jamaican songs. It is an exciting quartet!

Happily the Simms and Robinson Rock ‘n Roll duo did not appear on the show as they did not attend any rehearsals. But I do not think their absence was felt, and the success of the show without any rock ‘n roll overtones certainly suggests that this type of innocuous music has not completely captivated the Jamaican public.

Here is another photo that ran in that same newspaper. The caption reads, “The Message–from trombonist Don Drummond called his own composition and arrangement played in Jazz ’57 at the Carib theatre last night, and from the appreciative reception accorded the piece, there was no doubt that the message came across. He is seen here as he swings that slide, accompanied by (left to right) Jerome Walters (bongos), Aubrey Adams (piano), Lennie Hibbert (vibes), and at the back of the dais, Kenny Williams (drums) and Johnny Lawes (bass). Jazz ’57 was well received by the big crowd which braved last night’s chilly winds to hear the cream of the island’s jazz artists present at this year’s jazz jam.

I write about that song, “The Message,” in my book, Don Drummond: The Genius and Tragedy of the World’s Greatest Trombonist. It was a song that made crowds go wild. Below is a better resolution of the photo above.