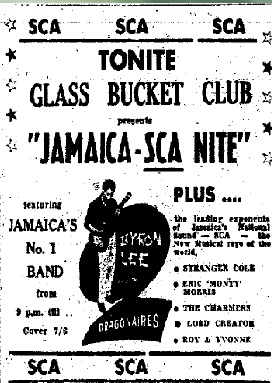 A documentary on the origins of the word “ska” cited an article from the Daily Gleaner on March 17, 1964 as the first printed mention of the word (You can view it here: https://www.youtube.com/watch?v=AIOxometSgg). However, I have found three instances that predate that source, thanks to Roy Panton. Why does this nitty-gritty matter? Well it is used by the Oxford English Dictionary (OED) as the source date, and so it is important to the nerdy etymological types, and I like to dabble in that area from time to time, but it is also important to those who study music history because, wait for it, wait for it . . . ska was originally spelled “SCA!”

In a recent conversation with Roy Panton, he said to me, “You know that ska was originally spelled S-C-A, don’t you?” Here I had researched and written about ska for years and I had no idea. I had to find out if this was true. So a search of the Jamaica Gleaner, through all kinds of irrelevant results as you can imagine, pulled up four instances of  “SCA,” three of which occur in 1963. One is above and here are the others, so you can see them too. 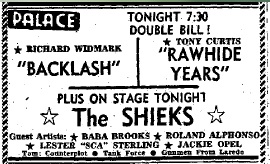 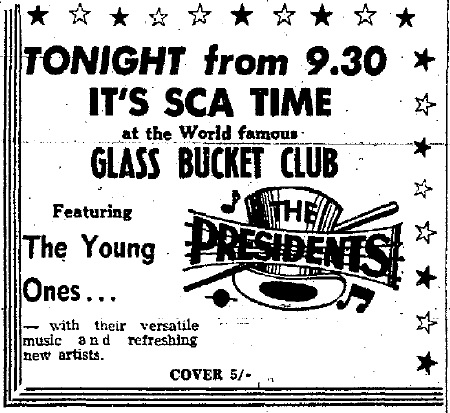 How did this happen that ska was originally spelled this way? Well I would venture a guess to say that it was an oral term before it was ever a written term, and that’s the way it sounds. I know from teaching my own kids a method of phonics so they could learn to read that the C and K both make the hard sound, and so it is understandable that SCA could be a spelling.

The first time the spelling “SKA” appears in print is indeed in the March 17, 1964 article cited in the documentary for OED officials, although, as the article notes, the genre had existed already for years. In fact, I, along with most historians, recognize the song “Easy Snappin’” by Theo Beckford as the first example of a ska song. When the word itself was first used, and how it came to represent the genre, is subject of much debate. I side with the argument that it is an onomatopoeia for the sound the guitar makes. There are other valid theories as well that are put forth in this documentary, and every Jamaican pioneer will give you their own take on it as well.

Below is the article from March 17, 1964 which I have typed under the image so it is readable, and I would also like to note that it is not until British colonial culture recognizes this genre of music that it is actually written about in the press. Interesting.

–but they call it Blue Beat

I suppose we’d all reckoned without Jamaica. Since the failure of that embarrassing calypso which we were told could sweep the nation — the nation remained unswept—we have tended to rule out the West Indies altogether.

Nowadays we get our hits from conventional sources like singing nuns and the Salvation Army. But in the West Indies music has always been the things.

In Jamaica, for instance, they buy records before they buy food. At last they have come up with something called the Blue Beat. We are now buying it and dancing to it.

I wouldn’t say we were lapping it up in our millions but we are going for it in a big way. There’s a blue Beat record in the charts and the London and Brighton clubs are riddled with it.

What is it? You may well ask. It’s like slow, pounding, monotonous, primitive rock with a strong accent on the off-beat. It depends on the monotony for its excitement. It has a slight roll to it and give the impression of having been inexpertly recorded (This is because it Jamaica it often is inexpertly recorded).

You don’t so much hear the African influence as sense that it is there. The words are indistinct and mercifully disassociated from love and boys and girls. They are about animals or parents or children. King of Kings, the one in the hit parade, is about a lion. Others have titles like “Parents Do Not Provoke Your Children to Wrong” or “Honour Your Father and Mother.”

I got the story from a rather handsome young man of 26 with reddish hair called Chris Blackwell. He comes from Jamaica and arrived in this country two years ago. Since then he has released over 200 Jamaican records.

He used to pile them into his Mini Minor and flog them himself from record shop to record shop. Nobody ever played any of his stuff on the BBC or gave him much encouragement.

Now he has a white Jaguar and an office in Kilburn with piles of records climbing up the walls. Next week EMI takes over his distribution but Mr. Blackwell rather preferred it when the business was small. “It keeps it a fight.”

Towards the end of the fifties the Jamaicans got keen on rhythm and blues, particularly a record called No More Doggin’ sung by Roscoe Gordon. They got hold of this beat cheered it up a bit, added some cute lyrics and called it Ska—an onomatopoeic word for the sound the guitar made.

From 1959 onward this was all the rage. We called it Blue Beat here because of the label it was issued on. Cleverest of all the Jamaican producers was Prince buster, now 28. There was Carolina, Humpty Dumpty and his own song Madness in which he just sings the word Madness over and over again. These sold extremely well here and the whole thing started to catch on last summer.

Prince Buster calls himself Prince Buster the voice of the People. He, Duke Reid, Sir Coxson, and King Edwards are the Jamaican names to conjure with. They are fond of titles.

They treat the record like the eighteenth century lampoon. Prince Buster was once furious with a man called Derrek Morgan who left his employ to go to work for a Chinese competitor.

Prince buster promptly sang a very insulting song called ‘Blackhead Chinaman.’ It went, “Are you a Chinaman, are you a black man.”

Everybody asked themselves: “What’s Buster saying now?” and bought the record like mad.

Quick as a flash came Derrick Morgan’s reply, a song called ‘Blazing Fire.’ It went: “you said it and you are a blazing fire.”

14 thoughts on “Origins of the Word Ska”