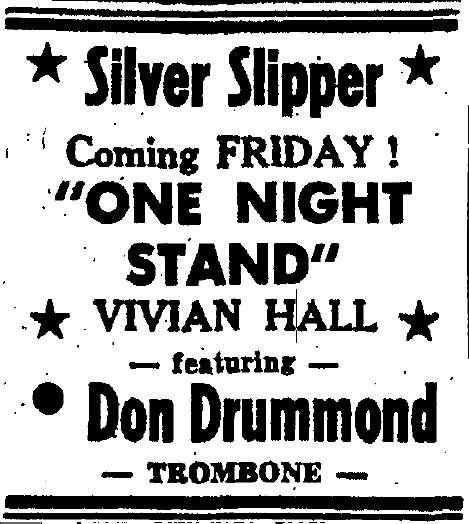 Last October I wrote about the Glass Bucket, so now I’d like to take some time to talk about another venue that gave ska musicians the opportunity to showcase their talent and earn a living—the Silver Slipper.

The Silver Slipper opened on May 23, 1931. The short comment about its opening in the Daily Gleaner stated, “Another night club dawns on us—the ‘Silver Slipper’ at Cross Roads which opens next Saturday. We hear it will be well worth a visit.”

The address was 9 Old Hope Road and it was a members-only club, which was really just a euphemism for whites only. Patrons included barristers, doctors, tourists, and the military. They also occasionally opened their doors to host charity events, such as raising funds for tuberculosis treatment in the mid-1930s, which was an illness that gripped the island, the Jamaica Olympic Association, and St. Joseph Infant School.

In the 1930s, the entertainment was largely musical and occasionally featured other entertainment as well, like magicians. Guest musicians were brought in from the United States, such as baritone saxophonist Bob Martin in 1933; famous dancers, Cherie and Tomasita straight from the Broadway review, in 1934; and Gaile Darling in 1935 for a three month engagement. Senor Juan Lucas’ Sonora Marimba and Jazz Orchestra along with King’s Rhythm Aces were the house bands in the mid-1930s. In December, 1934, the Silver Slipper’s dance hall and supper rooms were remodeled and enlarged.

In the 1940s and 1950s, the Silver Slipper continued to host private affairs such as annual dinners for exclusive schools like the St. George’s Old Boys Association (alma mater to Byron Lee and former Prime Minister Edward Seaga), Immaculate Conception High School Association, Bethlehem College Old Girls, and other select groups like the Melbourne Cricket Club. Over the decades, year after year, the Silver Slipper Club also played host to the Caribbean Table Tennis Championships. The Silver Slipper Club even hosted a number of large auctions, selling furniture, appliances, carpets, and equipment since it could house the lots.

In the 1940s, music at the Silver Slipper came from two prime orchestras—George Moxey & His Orchestra, and Milton McPhearson & His Orchestra. They performed the jazz standards of Europe and the United States.

In the 1950, music came from Sonny Bradshaw and his band with Baba Motta on piano. They called themselves Sonny Bradshaw and the Real Gone Guys. Frank Bonito and His Orchestra were also a standard, and Baba Motta also performed at the Silver Slipper with Harold “Little G” McNair and Lord Fly in a band called the Mechanics All-Star Orchestra. Other orchestras performing at the Sliver Slipper Club in the 1950s were led by Roy Coburn (and his Blue Flame Orchestra), Val Bennett, Vivian Hall, and George Alberga. Eric Deans performed at the Silver Slipper from time to time, as he did in June 1955 in what the club billed as a “One Night Stand,” meaning they weren’t a regular act. In April, 1956, Don Drummond performed with Vivian Hall. He had previously been performing at the Colony Club, with Eric Deans, and the Bournemouth Club headlining his own band.

The recording era was not good for live entertainment. The clubs were once the source for all music in Kingston, but when the sound system operators left the clubs to enter the studios in the 1960s, records could now be purchased for music in the home, in the yard. Plus, live musicians could find employment in the studio so the clubs began to suffer. And the music began to change. Large-scale jazz orchestras were no longer popular in the United States and so when tourists came to the island to visit they didn’t want to hear this old-fashioned music. American rhythm and blues was the thing, and Jamaican music changed to reflect the tastes of the people.

In October 1967, just after hosting its last Caribbean Table Tennis Tournament, the Silver Slipper Club closed its doors for good. They ran a want ad in the Daily Gleaner with the notice that they were clearing the building for development. In November the building was demolished.

A front page story in the Daily Gleaner on October 5, 1967 stated, “’Silver Slipper’ has had a long and colourful history as a centre of entertainment in Kingston. It was one of the pioneer night clubs of the city, sharing honours with the long-vanished Bronx Park, Springfield Club, and the still-existing Glass Bucket Club (now re-named the VIP Club). Situated near Up Park Camp it was at one time the popular haunt of English soldiers before 1962. In more recent times, it has been a sports center, being especially used as a venue for table tennis competitions. Mr. Joseph, who acquired the building recently, has advertised it for sale, as the site has to be cleared within two weeks for the start of the new commercial development there.” That commercial development was the Silver Slipper Plaza, a shopping center that still stands there today.

Although I wasn’t there to witness the Silver Slipper Club in its heyday and have only driven past the Silver Slipper Plaza to pay my respects, many of you have memories and history to share, so post your comments here and continue the discussion.

2 thoughts on “The Silver Slipper Club”